food for Though, Humourous, Sarcastic

What’s wrong with our TV? 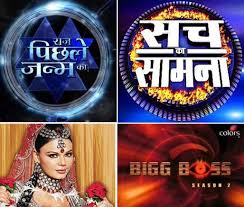 Ok, so there is nothing interesting happening on TV. Whatever is being churned out is highly mediocre, predictable and unintelligent. Reality shows are hardly real. Their larger than life portrayal is what makes them that much more difficult to digest. The plots, the dramatic music, the twists, the turns, the fake fights, the scandals are all well thought out and well rehearsed. Every tear that is shed on a reality show is scripted and well practiced, to the extent that the exact moment when the cameras will face the person shedding that tear and wipe it very, very aesthetically is decided. But most of us buy that, don’t we? That’s how real and convincing they make it look. We Indians are, by nature, a sentimental lot. Sob stories sell quickly and touch a chord with us. We connect better with people who are leading hard, struggling lives, don’t we? Ever wondered why almost every participant in the hot seat on KBC is oh-so-terribly poor?

There was a time, in 90s, when Hindi serials were so interesting. There was so much happening. It felt like the whole industry was riding a new wave, trying to change mindsets, breaking free from many a orthodox boundaries, projecting new ideologies, giving progressive messages and showing a better way to lead life in general. I remember serials like Campus, Dekh Bhai Dekh, Hip Hip Hurray, Rishtey, Zabaan Sambhal ke, Antakshari and many more that excelled in their own genre.

When India was just about entering a phase of globalization and liberalization and coming to terms with the influx of foreign channels and their extremely ‘modern’ shows, Indian Telly behaved like it has to be on it toes always, to keep up with the foreign competition.  The Indian Telly content focused on urban India and its challenges. It showed women in a better light. They were modern, educated, chic, progressive in thoughts and willing to break barriers. They taught Indian women that they had every right to all things good. Just like men have. They dressed normally, like how you and I do in our routine every-day life. They didn’t wear hideous make up and wear excruciatingly heavy zari-mari  sarees, which women in today’s soaps wear. They lead realistic lives; they were fiercely independent and worked for a living.

In today’s soaps, what role a woman plays? She decks up to the nines for every single shot, wears an inch thick layer of makeup and is seen sashaying down the house doing what? Nothing. Or probably she is just scheming, plotting or making ploys with obvious loopholes to make even with her saas/devrani/jethani/doosri aurat. Basically, she is shown like she is someone who possesses ‘zero’ IQ and who is nothing more than some dolled-up pretty Barbie. If at all she is shown like she is cooking something in the kitchen (yes in that unbelievable heavy bridal-kind of outfit), she will just be stirring something at the most, to make it look a bit real.

At any point of time, she is shown to be in one of the following stages:

Ya, Hindi serials revolve around marriages, engagements and pregnancies.  The zillion rasams and insanely ostentatious ceremonies make you feel like you are watching some wedding CD over and over again… Hum Aapke Hain Kaun style. They spin wonder stories and these extra-showy and flambuoyant marriages raise the bar for that poor middle-class Indian who wants to mindlessly ape these weddings and replicate the same in his daughter’s wedding.  Speaking of weddings, wedding industry is one of the biggest in India. Any doubt now why? Even in recession, this industry is hardly affected. That must say something about our obsession with big fat Indian weddings. Is there anyone who doesn’t love a big, blingy wedding? Coming back to the point, no wedding is shown without some shadow lurking over it. Some ex, some enemy, some secret person from the past is always waiting on the fence to pop his ugly head at the most inopportune time, just when the ‘dulhan’ is going to take her saat-pheras. How real, nay?

Ok, so once she does manage to get married without major glitches, she is forever embroiled in some larger-than-life and hard to believe drama. Or she is forever making sacrifices for the good of others. She delays her own happiness, and is willing to be misunderstood at every vital twist in the story (again if there is any). She won’t clarify things ever and lets them become messier with every passing day. She waits for time to do the right thing. After all, time heals everything, right?

And I don’t know why she is always so self-righteous and has at least a thousand morals and codes of conduct even when everyone else around her is being mean to her? She is very Sati-like really. She endures all torture and bears all brunt for things she didn’t do.

Oh yes, and not to forget, almost every Hindi serial is showing a picture of a very very sorry rural life. And even serials that show Indian urban lives have characters that behave in the most dehati fashion. And what I fail to understand is why are they always shown to be such big business tycoons? How many of us in real life are ‘that’ rich? They are all stinking rich on TV. But they almost never go to work, sparring a scene or two in a couple of months. Because they are forever embroiled in some mindless drama, where the solutions are so obvious even to a wench, but they elude them.

So much for reality!

I think shows in 90s were much superior and refreshing than what we see today. They had a rebellious streak in them. They wanted to see a developed India. They wanted to bring about a ‘change’.

What we see today is truck load of crap. And it is setting the country behind. Because a vast majority still lives in rural areas. And when they see these mindless soaps, they feel this is how rich and famous behave, this is how life in metros is. Can’t be farther from reality, can it?

Here is a similar post I did right at the beginning of this humble blog.

She does the talking around here

She is not an MBA

My Maiden Attempt at Writing